If only these walls could talk.

For more than eighty years, since its dedication in 1924, the Teton County Courthouse has been a structural stalwart of Main Street in Driggs, the county seat of Teton County, Idaho. This unassuming, two-story building has hosted its fair share of drama—political, criminal, and civil. With echoes of the public’s voices resounding through the hallways, it holds both the ghosts of yesterday and the records of today.

Former Teton County Commissioner Lavell Johnson remembers when Les Henrie was
the courthouse caretaker. When Johnson was a boy, Henrie took him and few of his friends on a tour that included the jail.

“He took us back to the jail to show us the cell,” Johnson remembers. “Then ’ol Les shut the door. It was no more than five minutes, but it felt like five hours.”

Henrie did unlock the doors and let the boys run free. But of all the memories Johnson accrued through his tenure as commissioner, nothing stands out like that boyhood experience of having the cell door shut behind him.

“That moment kept me straight for the rest of my life,” Johnson says, adding that it was the only time he ever saw the inside of a jail cell.
(Continued on page 51)

In 2005, the board of county commissioners, then made up of Republican chair Mark Trupp and Democrats Roger Hoopes and Jay Calder-wood, announced that a new courthouse would be planned with the financial assistance of developers David and Paul Huntsman of Salt Lake City, Utah, and Mike Stears of Driggs. Representing Blackfoot Farms, LLC, these men were set to develop the valley’s largest gated community to date, Huntsman Springs.

Plan One Architects drew up the courthouse plans, while Huntsman Springs was finalized and approved by the county in 2007.The new county courthouse is currently being built within the private development along Courthouse Loop off the Bates Road, using Blackfoot Farms’ money, along with county funds to complete the project. As of press time, the new courthouse was predicted to be finished by summer 2009.

The future of the old courthouse, an important historical landmark in Teton County, remains unknown. What happens to it is up to its new owners, Blackfoot Farms. Its past, however, will remain firmly imprinted onto the fabric of valley lore. 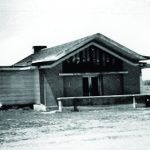