The Future of Ag in Teton Valley?

The Future of Ag in Teton Valley?

Five a.m. Jed Restuccia hits his alarm, stretches out of bed and begins the ritual of making coffee while the early rays of summer sun creep across the Teton Valley. It’s a ritual well rehearsed by Restuccia over the course of two decades as co-owner and operator of Cosmic Apple Gardens, Teton Valley’s longest running organic, bio-dynamic, Community Supported Agriculture farm.

Five thirty a.m., Todd Dustin hits his alarm, pulls on his knee-high rubber boots, puts on glasses to keep the bugs from his eyes, and makes his way to his four-wheeler. Thirteen different wheel lines, spread across twelve miles, await their daily repositioning. Dustin’s family has farmed the valley’s west side for five generations, and his second son Christopher hopes to continue the tradition. Today, Dustin Farms produces barley and hay for consumers as far away as Saudi Arabia, China, and Japan, and grows seed potatoes in cooperation with SunRain [see sidebar page 49].

Six-thirty a.m. Restuccia sneaks from the house, his wife and Cosmic co-owner Dale Sharkey and their three young children still sleeping. He heads to his truck and drives a mile to their fifteen acres of farmland. Restuccia tends to the small menagerie of animals, then meets with the various work crews before they head to the market and additional workers and volunteers pour in.

Nine a.m. Satisfied his five hundred acres of hay, barley, and potatoes will be properly irrigated during the day, Dustin finally sits down at the breakfast table. Meanwhile, Sharkey ushers her brood out the door, ready for a morning of harvesting flowers and preparing lunch for Cosmic’s workers.

Different farmers; different routines; all in the same valley. Resting at opposite ends of the spectrum, these two farms differ significantly in size, crops, and their approaches toward agriculture. But despite their differences, they face the similar challenges. From Mormon settlers in the late 1880s to commercial ag in the 1970s to organic CSAs in the 2000s, the face of farming in Teton Valley is ever changing, just as the seasons themselves. Here are some local farmers’ thoughts on what the next 140 years of agriculture in Teton Valley may bring:

What are the most pressing issues facing the future of farming in Teton Valley?

Jed Restuccia (JR): Other than labor and the normal day-to-day headaches, loss of open space, land, and water.

Dale Sharkey (DS):  Labor. It’s part of the bigger picture of our country’s income disparity and being able to pay a living wage to farm workers. We want to pay our employees a living wage but because we’re competing against behemoth corporations, we can’t.

Todd Dustin (TD): Am I going to be able to stay in long enough without going under? With all the pressures, it’s a difficult thing. For the last ten years, our prices have been declining steadily. But our input costs like equipment, labor, the cost of living—everything goes up. The economics is hard. Farming is different than any other business.

Agriculture can be rife with hot button topics. What are some of the biggest misconceptions about farming held by the general public?

JR: Nobody can understand why [food] costs money, but no one wants to do the work or pay the higher cost of people doing hard labor. It’s all about cost, which drives the other things: subsidies, labor shortages.

Christopher Dustin (CD), age 28: Sometimes I feel like people think we’re out here dumping chemicals into the ground and trying to poison the earth. Really, we’re not. A lot of these things are minimal with residual effect. Years of testing went in. It’s not like we want to put more on because every unit decreases our amount of profit. We’re just doing what we need to do to get by; what the ground needs to produce the crop.

TD:  You see somebody with one of those big combines driving down the road and think, ‘Gosh, they must be making a lot of money.’ That’s not the case. You can’t go out there and harvest that stuff with your hands. You’ve got to have something that will do it and tractors and machinery are very expensive.

Enrollment in BYU Idaho’s agronomy programs has almost doubled in the past twenty years, but the number of graduates taking over their family farms has declined from 50 percent to just 25 percent. What are the Restuccia and Dustin children’s plans for the future?

Roxanne Restuccia, age 5: Cowboy! I’d rather play with the cats.

DS: We just want them to be happy. We lucked out finding what makes us happy. We want them to be able to experience the same thing. Whatever that’s going to be, although I would push for some farm-friendly legislation if we end up with a president.

CD: Farming is always something I’ve loved to do, but it’s hard for all of us to make a living. So, I went into something similar, horticulture. That’s my job at Huntsman Springs. Running the farm myself someday, that’s the million-dollar question. I can’t just take it from my father. It’s something I have to work toward, but there are a lot of barriers like not having enough land to support both families. Land isn’t cheap around here. If we could go buy a thousand acres back for what my great-great-great grandfather paid, then there’d be no question we’d expand. That’s really the question for us. My dad had four kids, so how do you make it fair? My way toward fairness was to find another job and, where I can, help out.

Genetic engineering of crops, then precision agriculture, were heralded as the fix to feeding the world. What’s the latest buzz on farming technology and is it something you’ll implement in the future?

DS: For our scale I think information sharing is the big one. You can have a problem, Google it, and there’s a person with a small farm in Vermont who’s figured out how to solve it.

CD: I think proper nutrient management at variable rates is the next big thing, because soil is different throughout the whole field. You’re going to save money because you’re not doing blanket coverage and you’re able to produce more. It’s something we’re going to have to get better at if we’re going to feed the world.

Since the 1950s, the Teton Valley Aquifer has declined dramatically, and flow ratio has declined by half since the 1940s. The Idaho Department of Water Resources will soon be requiring updated water management with gauges, lockable head gates, and a reassessment of rights to small creeks and tributaries. What are your thoughts on the future of Teton Valley’s water?

JR: We could conserve water big time here in the valley. We haven’t seen changes but have concerns based on what we’re hearing. If we lose water rights, we’re going to have to change what we do.

CD: Through irrigation we’ve been able to advance our technology quite a bit. The wheel lines and hand lines people used were only 60 percent efficient. Now the pivot and the irrigation systems going in are 90 percent efficient in moving water. I think the only thing we may be able to change is how efficiently we use that water.

According to the American Farmland Trust, 86 percent of fruits and vegetables are threatened by sprawl. It’s not simply the 15,000 acres of Idaho farmland that are annually lost to development, it’s the way water and soil quality and quantity are impacted. How does this play out in a place like Teton Valley?

TD: I think they’d have to do a lot of building before it would impact a lot of farm ground. Most people build near the streams or close to the forest, which is [another] issue, but you don’t see much building on the flat farm ground.

What are ways Teton Valley residents can support local farms of all sizes?

DS: Buying from your neighbor, buying local. Make farmland a priority if and only if you want to keep eating.

TD: Our biggest worries and concerns are input and what are we getting out. I don’t know what the community could do to help us, as far as that goes, but mainly understand that it’s not easy. Those beautiful green fields they ride their bikes by, we’re here to try and stay. Hopefully we can. Hopefully we don’t get priced out of the valley like we’ve seen in Jackson.

CD: I think sometimes there are a lot of people on the outside looking in and they don’t understand the full picture. And we as farmers, maybe, on the outside looking in might not understand their full picture either. But being open with each other and creating that dialogue … we can break down barriers, and become united. When I grew up everyone knew everyone and there wasn’t very much contention. I think that’s what everyone wants, to come together as a community. There’s no reason why we can’t, we just need to open up and be cordial with our communication.

Environmental Protection Agency scientists estimate that by 2050, water flow in Idaho may be 50 percent less than it is today. Combine this statistic with a measured decrease in snow and a temperature increase of up to two degrees. Does climate change and its impact on farming concern you?

JR: Of course, we’d be super happy if we had warmer temperatures here, but the violent storm cycles would seem to be what could hamper the way we farm. Who knows what will really happen with the precipitation?

DS: It could change the whole ecosystem, so we’d have to relearn how to do everything. And if it continues changing, can we keep up with the changes?

TD: I’m not so much concerned with a changing climate. I know that things go in patterns. In the past few years, we haven’t had much of a winter. But we had a pretty good winter this year.

Studies also anticipate an upward change in growing zone by mid-century. Are you concerned how that might impact seed potatoes, which thrive in our cool climate?

TD: I don’t think it would influence seed potatoes. Last year we had one of the hottest summers on record, but it still froze [early enough]. I don’t see that changing what we do. If it changed a zone I think it would be every place in Idaho but Teton Valley, because we’d still have the mountains around us and only so many hours of sunlight.

CD: I’m only twenty-eight years old, but I’ve seen the cycles my whole life. There have been times we were trick or treating in snow clothes or when we had rain on Christmas. Even if we did go up to Zone 4, that’s still less than Rexburg. With the mountains the way they are, the high altitude, and the number of growing days we have, we’re really kind of blessed in a sanctuary for low disease and insect potential. It’s not much of a concern.

What are your hopes and ideas for the future of farming in our valley?

TD: I hope it stays for a long time. I think it’s why people are coming here, it’s for the wide-open space. It’s not an easy way of life, but it’s a way of life.

JR: I think the future of farming for this valley is going to rely on value-added or specialty crops, because we’re going to run out of land.

DS: It comes back to, are we making choices that are healthy for us, the environment, and the community? If you’re not doing those things, it’s not a sustainable business.

**Quotes edited for clarity and length. 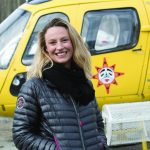 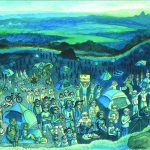 Totality in the TetonsFeatured Stories