The Business of Bees

Teton Valley is abuzz with bees. You may have noticed large stacks of hives piled up in certain farm fields. Perhaps you purchased some local raw honey via Facebook or at one of the local farmers’ markets. Maybe you read Christina Shepherd McGuire’s article on backyard beekeeping in the spring edition of Teton Family Magazine.

Little wonder. Demand for local honey is at an all-time high and Teton Valley is a great place to raise bees. These are facts that have not escaped commercial beekeepers, both large and small.

A few years ago, Scott Hansen thought it would be fun to have a few bee hives on his family’s property near Darby Canyon. At the end of the first summer, he realized the twelve gallons of honey he harvested was way more than they needed. In order to recoup a small fraction of the startup costs (approximately $425 per hive), Scott’s wife took to a Facebook garage sale site and posted honey for sale. In less than twelve hours, all seventy-two twelve-ounce bottles were sold. “I had no idea there was that much desire for local honey,” said Scott. The following year, the Hansens upped their investment from three hives to seventeen, and came up with a name for their business: Bear Naked Honey Farm.

While honey is the initial push for Bear Naked, it is not the end game. Beekeepers have four ways of getting bees. They can 1) purchase a package of bees that they “pour” into a hive; 2) buy a nucleus colony, which is a mini-hive with a queen and bees in all stages of development; 3) split an existing hive in two, leaving the queen in one, while the split raises a new queen; or 4) catch a swarm.

The problem with most of these options for Teton Valley beekeepers is the queens are often ones raised or overwintered in southern states. “I want to raise and sell honey bees and queens,” Scott said. “My goal is to raise ‘hardy bees for harder weather.’”

While they are a few years out from selling locally raised nucleus colonies, Bear Naked Honey Farm currently sells raw and unfiltered honey and may be adding lip balm and honeycomb to their offerings.

If seventeen colonies sounds like a lot, consider the fourteen thousand colonies Cox Honey Farms has across the state. In the summer, Teton Valley is home to approximately twelve hundred of them. Based in Shelley, Cox Honey has been bringing bees to Teton Valley for at least fifty years. “My grandfather set up many of these locations,” said Brent Cox, one of the company owners.

While Bear Naked Honey Farm’s bees spend their entire year in Teton Valley, Cox Honey’s bees travel quite a bit. All Cox bees spend the late fall and early part of winter in potato cellars. Come January, the bees are loaded onto refrigerated trucks for the long journey to the San Joaquin Valley in California where they are used to pollinate crops, mainly almonds. “We found that reefer units set to forty degrees keep the bees in cold stasis,” said Adam French, Cox Honey’s chief financial officer. “We don’t want to stress out our bees.”

Why put the bees through interstate travel at all? Big money. According to the U.S. Department of Agriculture, pollination fees brought in more than $660 million in 2012, while honey revenue was less than half that. With two colonies needed per acre for more than one million acres of almond groves, that is a whole bunch of bees. After the pollinating season is over in March, the bees are treated for mites (see sidebar “Mitigating the Mite Problem”), placed back in refrigerated trucks, and delivered to fields in the Snake River Valley. The bees are then brought up to Teton Valley at the end of April to feed off the abundant supply of dandelions.

“Interesting thing about Teton Basin,” said Brent, “it is one of only two places [Star Valley being the other] where we have the amount of dandelions needed to get our bees strong.”

“Once the hives are bubbling with bees,” added Adam, “we take the colony and split it to make two out of one.” They do this to make up for colony losses. Finally, in July, the alfalfa and clover flowers begin blooming and honey extractor boxes, known as “supers,” are placed atop the colonies.

Cox Honey Farms, like most large commercial bee outfits, sells clover honey, with its light color and mild flavor. Cox begins harvesting honey supers in August and continues as late as October. With an average of twenty-five to thirty pounds of honey per colony, Teton Valley produces more than 25,000 pounds of honey for Cox each summer.

“Teton Basin is one of the greatest places on the face of the planet and one of the main places for making our honey,” said Brent. “It is one of the reasons our honey tastes so good.”

Next time you come across a honey bee in the valley, take a moment to consider this: If you buy your honey from one of the small local honey producers, or purchase a Cox product—their honey is available at Broulim’s in Driggs—that sweet nectar the bee is sucking up just might end up in your tea or dessert. 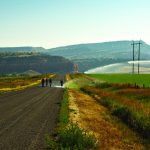 Big Adventure in (and above) the BasinDepartment Stories 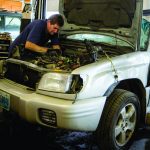